Recently, I need to upgrade docker version in gitlab runner and I get some exposure to the dind or docker-in-docker service.

From gitlab-ci.yml reference, services is a list of docker services that are linked with a base image of specified image. What does this mean?

Base image is from image keyword, which runs the CI jobs. services are other running docker containers that can be reached (linked) by the network. For example, the dind (docker-in-docker) services can be reached by what’s set in DOCKER_HOST, which is tcp://docker:2375, whose docker part is the service name for the dind service listed under services attribute, and it will be substituted with the dind service container’s IP address. The port 2375 is chosen to receive HTTP requests without TLS encryption. If HTTPS is needed, use port 2376.

From gitlab dind reference, one benefit is that each CI job has its completely independent docker engine,

When using docker-in-docker, each job is in a clean environment without the past history. Concurrent jobs work fine because every build gets its instance of Docker engine so they won’t conflict with each other. But this also means that jobs can be slower because there’s no caching of layers.

In the base image container, when running docker command, it will use DOCKER_HOST and send requests to the dind service to execute the docker commands. 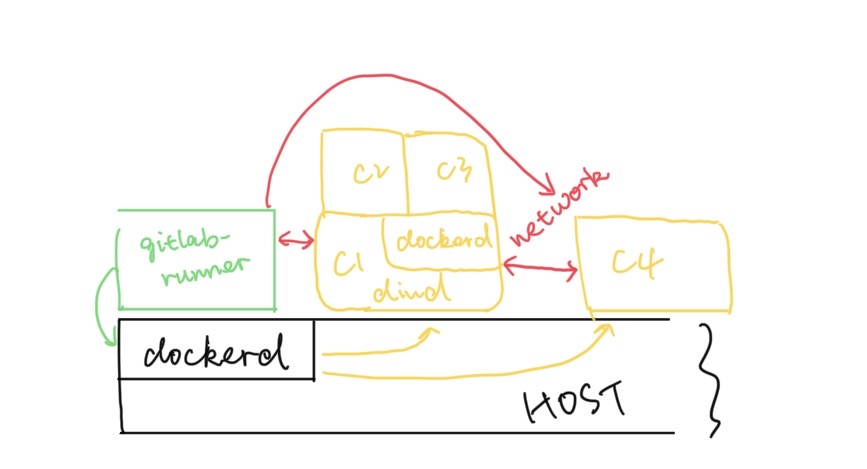 As shown above, only gitlab runner has direct access (privileged access) to the docker daemon, dockerd in above graph, which is running in the host machine. Thus, this CI/CD container instance can issue docker commands to the host machine to spawn and control new containers.

For dind container C1, it can issue docker command to its own dockerd, e.g., docker build or docker image pull, without sharing the host dockerd. In other words, dind provides an isolated and clean docker execution environment. Therefore, C2 and C3 uses the docker build context from C1. Besides that, C2 or C3 cannot send any docker command to intervene C4, which can prevent insecure issues such as docker container stop $(docker ps -a).

As it is mentioned here, this method can avoid nested docker in order to avoid some runtime overhead.

The gitlab docker instance will shared the /var/run/docker.sock from host machine, which is the domain socket listened by docker daemon. What’s more, compared with dind approach, it doesn’t require the docker container to have privileged access to host docker engine. The runtime layout might look like below: 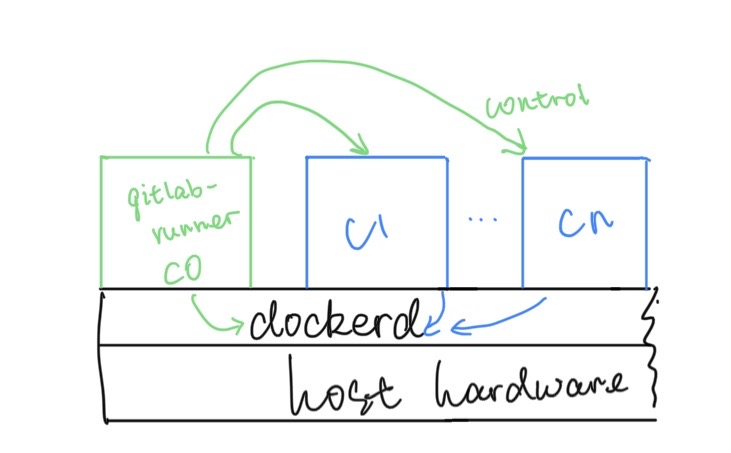 In above graph, the gitlab-runner instance can control other containers or CI/CD jobs through networks or by issuing requests to host docker daemon, e.g., docker container stop.

All the newly spawn containers will have direct access to the host docker daemon so that they can invoke docker command within their container. The advantage is that it doesn’t introduce extra virtualization overhead.

However, it has some drawbacks, as it is mentioned by gitlab document:

As for CI/CD purposes, dind doesn’t have above drawbacks and it’s a better choice since job isolation is the most critical criteria for concurrent jobs to run.